Pin It
You are here: Home » Leadership » Granddaughter to Ruler of Swat, Zebu Jilani Continues to Fulfill her Family’s Duty in Pakistan

Granddaughter to Ruler of Swat, Zebu Jilani Continues to Fulfill her Family’s Duty in Pakistan 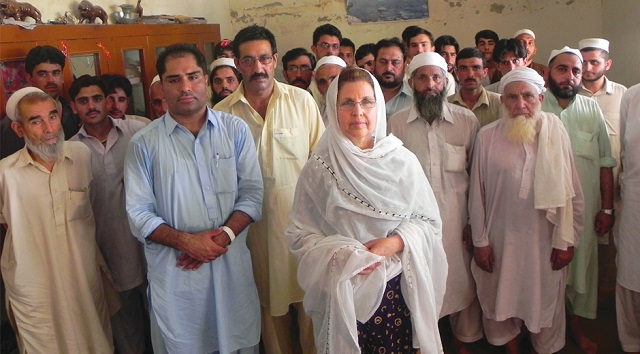 Born into the ruling family of Swat, a district in the state of Khyber-Pakhtunkhwa, Pakistan, Ms. Zebu Jilani is continuing her family legacy of working with the people of Swat.

As founder and president of the Swat Relief Initiative, Ms. Jilani works tirelessly to improve the lives of women and children in Pakistan through healthcare, education, economic growth and sustainable environment initiatives.  We got a chance to speak with Ms. Jilani:

Elan: You are a Princess of Swat.  Your family has a long history of investing a lot of resources into education.  How does that legacy impact your work today?

Zebu Jilani: Swat has been in the news recently for its lawlessness, violence, killings, and massive displacement of its people, but, while growing up in this beautiful place, my memories are of its peace and tranquility and its compassionate and hospitable people. When I lived in Swat in the 1950s and 1960s, it was famous for its tourism and people spoke of its rich culture and history associated with Alexander the Great, Buddhist empires and, more recently, the Yusufzai Pathans. In 1961, Queen Elizabeth stayed as a guest with my grandfather and called Swat “The Switzerland of the East”.

I remember as a child, I would join my grandfather, Miangul Jahanzeb, on his daily drive. Every evening he would pack us grandchildren into his Chevy Impala to pay a surprise visit to a different part of the State.  My grandfather never failed to mention that this was his duty, while he and his Chief Engineer would go to inspect the State’s infrastructure, of which he was immensely proud: schools, clinics, police-stations and administration-units, every couple of miles. These excursions taught me a valuable lesson from an early age – that unless you are personally involved in your projects, you will never succeed.  These are strategies that I now follow in running my organization, Swat Relief Initiative.

My grandfather’s morning duties were grueling too. His role was that of king, religious leader, chief minister, commander-in-chief, and chief justice. This was a unique system of administration for that part of the world.

The balance between traditional culture, and modernity ensured a progressive, efficient system.   For four generations our family provided peace, civility, and tranquility to the State, transforming a raw tribal structure into an organized, efficient and modern system.

Because of my grandfather’s dedication and hard work, his rule is considered a golden era in Swat, and people have the highest regard and respect for him. This reputation makes it easier for me to work in Swat, as people are willing to work with me and trust my organization.

Elan: You started the Swat Relief Initiative (SRI), back in 2009.  What motivated you to start it?  Why do you focus on women and children?

ZJ: I remember, in 1969 we were all sad when the State of Swat lost its independent status and was formally taken over by Pakistan.  We saw how the new Pakistani bureaucracy that took over from my grandfather was slow in providing administration, justice and security.

It was the loss of social services that helped give rise to the Taliban in Swat.  Between 2007 and 2009, I saw our relatives being repeatedly targeted by the Taliban. Our first cousin Isfandiar Amirzeb, an Education Minister standing for his Provincial Assembly seat, was blown up in his car with 8 others in the middle of his campaign, a day after the assassination of Benazir Bhutto. I was saddened to see all these near and dear relatives and friends suffer such a terrible fate. 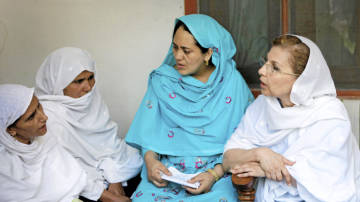 It grieved and alarmed me to hear that the Taliban blew up more than 400 schools built by my grandfather, many of which were girls’ schools like the Presentation Convent run by Irish nuns. My favorite place, the ski resort at Malam Jaba, built by my grandfather in conjunction with the Swiss government, to increase tourism revenue, was also burnt down.

In 2009, I got news from Swat that the Army had finally come in full force to get rid of the Taliban and heard of the terrible destruction of infrastructure and homes which resulted in the greatest displacement of people since the Rwandan genocide, with close to 3 million IDPs from Swat and neighboring districts living in the most squalid conditions.

When I heard of the plight of the people of my homeland, I was compelled to help them.  I could see that helping 3 million people would be no small matter, so I set out to form an organization called Swat Relief Initiative with the help of my husband and children.  After collecting funds from generous friends and organizations like Abbot labs, National Rural Support Program and Wyeth labs, we went to Pakistan in March of 2009 to help the IDPs.  We worked tirelessly during that whole summer in 120-degree temperatures, running several mobile health units equipped with medicines and supplies to make life easier for the refugees.

Our main effort was to help women and children during this crisis, as I have seen firsthand, how women have suffered because of their low status in society and how all of this stems from women not having the power to earn a living.

In Pashtun communities, young orphaned children are killed for their property while women are considered chattel to be done with as men please. I could not bear to see this injustice, so I tried to remedy this by helping women become educated and learn skills to help them become earning members of their families.  This will help them become respected in their society.

Elan: What is one program that SRI offers which is close to your heart?

ZJ: Our programs, whether they focus education, health, economic empowerment or community development, are all dear to my heart, because I understand that in order to bring about meaningful change for women; our approach has to be multidimensional. But, since my background is in nutrition, I have been more personally involved with this project. I conducted a two-year study on the health and nutritional status of women and children in 2010 and created a health and nutrition seminar that is now being conducted in an area that has a population of almost 20,000 people. I also talk about health and nutrition on Voice of America, a program which is broadcast to all the Pashto speaking areas of Pakistan and Afghanistan.

I have created the SRI health and Nutrition seminar (the first of it’s kind in Pakistan) for poor rural villages as a proactive, integrative and interactive approach to addressing the health needs of the local population. This seminar targets women and children to motivate them to take charge and be actively involved in improving their health. We cover topics like kitchen gardens, making compost, children’s health, hygiene, exercise, benefits of breast-feeding, and how to replace junk food with nutrient dense food and other related topics.

I am very passionate about this seminar and conduct the seminar personally in many rural villages when I am in Pakistan.

Elan: Swat really became popular after Malala’s unfortunate incident.  You’ve known her family for years, and have worked with her father, Mr. Ziauddin Yousafzai on a number of different projects.  How has Malala impacted the overall situation for women and children in Swat?

ZJ:  Yes, Malala’s fame has definitely brought more attention to Swat and the hardships its people have faced due to the conflict created by the Taliban takeover. Even though Malala has gained tremendous popularity in the west, it is unfortunate that she cannot go back to help her people.  The way the culture is set up in Swat, you cannot be effective in bringing about change when you are not physically present in the area (one of the many things I learned from my grandfather). Even though I live in the United States, I make sure I go back for 3-4 months of the year so that I am in touch with the people, and they are aware of my intentions. This kind of face-to-face interaction is very important for people in that part of the world.

When I initiated the Rotary Club in Swat, Ziauddin, Malala’s father, was one of the first people I asked to join, as he was considered an activist in the community. He immediately agreed and a long friendship began. Being a woman, I broke all taboos by starting the club, since it is socially restricted for someone of my background to approach men. When I first started the club, I was the only woman among 30 men. This was unheard of in Swat.

Elan: What has been your greatest challenge?

ZJ: My biggest challenge has been to motivate people to be honest and to work for the love of community. In Pakistan, civil society has become progressively more dysfunctional. The present value-system promotes corruption, propagates religious misconceptions and lacks dignity of labor. This collapse of civil society is the reason why there is so little progress and has become a big challenge for people working there.

Elan: On a personal note, you live in the States but have maintained a deep connection with Swat.  What keeps bringing you back?

ZJ: Swat for me is not just a place, it is part of my being. Swat flows through my veins. I have tremendous love for Swat and its people as they have given me so much. I feel it is my obligation to help them now that they are going through such a difficult time. To me, Swat is the most beautiful place on earth and I will never abandon it or its people as long as I live.