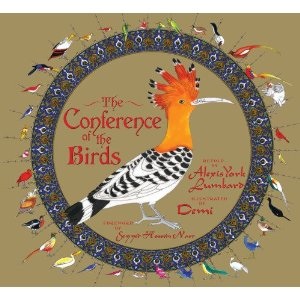 Alexis York Lumbard, 31, recognized a shortage of well-written spiritual books for children.  She took a suggestion from her husband to turn a Persian classic, The Conference of the Birds, into an illustrated children’s book.  Having studied Classical Arabic in Egypt for several years and a degree in Religious Studies from George Washington University Lumbard’s concept for the book is both entertaining as well as informative.  We got a chance to speak with her:

Elan:  Tell us a little bit about your professional background.  How did you get involved in this project?

AYL:  I have been writing for 5 years.  The Conference of the Birds is my first published picture book.  My husband, a scholar of Islamic studies, suggested causally one night that I read a translation of the epic poem as he thought it might make a wonderful children’s book.  I hadn’t read Attar’s work before, though I had heard of him.  Lets just say I finished the book (the penguin’s classic by translators Afkham Darbandi and Dick Davis) in just a few days.  The beauty and depth of the original lit a fire beneath me and I immediately began to conceptualize how I would go about reshaping it for a new generation and a much younger audience.

AYL:  I was interested in the spiritual message in Persian poetry and the love of God that permeates the tradition.  I think the best way to attract children towards the Divine is through love and beauty.

Elan:  How is your version different than the others?

AYL:  My version is loosely based on the original.  I maintain the essential narration arc but leave behind the rich complexities found in Attar’s masterpiece. For example, the original takes the wayfaring birds through a series of seven valleys: each representing a particular stage along the way to enlightenment.  Within this scheme it also highlights numerous vices, which the birds must overcome. My version does not involve the seven valleys.  Only briefly does it touch upon the landscape of their journey.  I chose instead, to focus upon five birds and the five inner challenges they face. These challenges are tendencies to which all children can relate (laziness, attachment to worldly objects, fear or doubt, judging others, and pride).  This contemporary adaption also differs from the original in that it is written mostly in prose. Only the hoopoe speaks in rhymed verse, a decision I made to distinguish him from the other birds.

Elan:  What was the greatest challenge for you in this project?

AYL:  Since I was writing for an audience as young as age 5, I needed to keep the language and message as simple as possible, and yet still maintain an air of majesty.  That was the challenge. But the beauty of picture books is that the illustrations dance along side the text, explaining and enhancing the meaning of the words. Demi, the illustrator, did a most spectacular job.  It was an honor of a lifetime to work with her.

Elan:  Dr. Seyyed Hossein Nasr, a legend, wrote the forward to the book, tell us how that added to the book?

AYL:  Dr. Seyyed Hossein Nasr’s forward provides insight into bird symbolism across many cultures.  He also contextualizes Attar’s work within the broader history of Persian Sufi literature as well as its impact upon other Muslim cultures. His forward is a great resource for those not yet familiar with this tradition, a useful prelude for librarians, teachers, and parents alike.  I studied with Seyyid Hossein Nasr during tenor at GWU and never in my wildest dreams did I think he would one day compose a forward to a book of mine.  I still have to pinch myself.

Elan:  Do you have any other upcoming projects?

AYL:  Yes, I am currently running a kickstarter campaign to fund the first ever book app/ebook about the life of the Prophet Muhammad (p.b.u.h.), entitled Meow, Meow Mawlana:  The Story of Muhammad.  This was the very first manuscript I wrote, some five years ago during this blessed month of Ramadan.  It, too, is a picture book for the young written as a lyrical ballad.  I am very excited to see it brought to life with tasteful animation and subtle sound affects.  With gorgeous illustrations by Maram al-Hidmi a Palestinian artist trained in several styles of traditional Islamic miniature painting and a touching lullaby by American singer/songwriter David Dakake, it will be, God-willing, a very special book.