Pin It
You are here: Home » Women » iCover: Documenting the Journeys of Muslim American Women 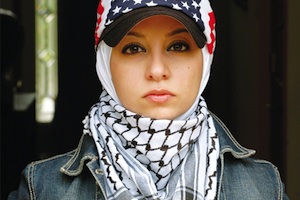 Sadaf Syed is a renowned photojournalist who has been recognized as a leading photographer and artist who captures images to educate and provide the truth about respective subjects. Syed graduated from California State University-Fullerton with a degree in photojournalism and communications. Her photo documentary book iCOVER: a Day in the Life of a Muslim-American COVERed Girl is a work of art that shares photos and stories about unique Muslim women throughout America. After 9/11, Syed believed it was her duty to correct the biased views towards Muslim women. We got a chance to speak to Sadaf.

As a Pakistani Muslim-American born in Illinois and raised in California, what were the differences between the two states in the Islamic perspective? How has being raised in the States, shaped your experience as a Muslim?

As a Pakistani Muslim-American in California I was blessed to be surrounded by peers who were God cautious. Growing up we used to watch each others back – -if we felt that one of us was going off track we would always keep each other in check. There was a sisterhood bond between us friends. That’s why we are still close 25 years later, alhumdullilah. I moved to Illinois as a married woman and that itself is

an adjustment. Everything and everyone was new for me. It takes time to fit in but alhumdullilah Illinois is too a great place … you just need figure out what you want from your life and then find that community for your self. Of course easier said then done – but there are great options in Illinois as well.

Being raised in the States has been a blessing, alhumdullilah. To live in a country that is not Muslim but still feels “Islamic”. What I mean by that is that Islam is made up of many cultures and races and when you live in the USA that is what you see and learn from. You get inspired by different cultures, faiths, and traditions and can appreciate them and learn to live and work with them.

USA give us the freedom to be a “a practicing Muslim and an “American” at the same time. That’s a privilege!

Where did you get the idea for iCOVER?

Islamophobia is on the rise and hate crimes against Muslim-Americans steadily increasing across the country. iCOVER is a reflection. The voices and the faces of the followers of a faith that is over 1,400 years old have begun to feel more and more under siege. We are now aware that for too long Muslims have allowed others to define us and explain to the world on our behalf what Islam actually stands for. My community acknowledges that it is our own duty — and no one else’s — to inform our neighbors and friends about who we are and what we believe, and my photo documentary book iCOVER: a Day in the Life of a Muslim-American COVERed Girl is the result of that awareness.

What has been your greatest challenge with producing this book?

The greatest challenge with producing this book was learning the ropes of self-publishing. Being a photographer didn’t cut it. I now had to force my self to learn the business aspect of producing a book.

What was the response you received after publishing iCover?

The constant emails I would get from the Muslim community gave me strength to believe that a book like iCOVER is way overdue. The encouraging emails and phone messages definitely makes it easier to stay optimistic. I have been getting great positive vibes from my photo exhibitions, book reviews (domestic & international,) and book sales/signings from both Muslim and non-Muslim audiences.

Of course you can never please everyone. People have different perceptions of telling a story whether it’s to educate or not. But that’s not always a bad thing! It gives us variety of ways to tell our stories – – whether it’s in a form of a talk, a song or a book.

I’m sure that it was a tremendous honor that your work has become known in many countries. How did you feel the moment you know you were invited to the White House to celebrate the beginning of Ramadan with President Barack Obama in 2010? What was it like attending the event?

Getting an invite from the White House was surreal. At first I was confused not knowing if this is for real?! My family and I had to Google the name of the person who personally sent me the email. Later, I found out that this was the same person invited a family member of mine to the White House previously as well. Alhumdullilah, that’s when I believed it 100% and was VERY excited. But when I called the White House and received the invite in my mail is when I told extended family and friends. Alhumdullilah to be acknowledged in the duniya is a blessing from Allah…

How have you managed to be a wife, mother and photojournalist? What was your routine while you were creating iCOVER?

God made it happen. It was busy but being productive is good especially when you are passionate about something — things do get done that way. Constant prayers and asking Allah for guidance (even now) to make the right situation and people come your way. I tried not to think too far ahead, I had to be organized but to try to balance all my appointments according to everyone’s schedules was sometimes a challenge. Traveling with kids, their double strollers, diaper bags and more would sometimes get exhausting. If you travel with the neeyah (intention) that you are only going for work, I sometimes would have to make some time … even a few hours to do something “touristy” to relax and enjoy the company of extra luggage and children.

The sisters in my book were responses from public’s nominations for 4 years via emails, phone calls or social networks for the book iCOVER. Every time I would fly back home from my photo tours these women would leave me feeling motivated and inspired. They reminded me about the famous quote by Johnetta Cole, “When you educate a man you educate an individual when you educate a woman you educate a whole family”.

What was the nicest thing you heard about iCOVER? Something that was inspirational?

I recently received an email from a Jewish fan in which he wrote:

“On the campus where I work, I welcome the sight of women, especially those who are young, clad in hijab. They are excellently comported, and stand in absolute contrast to the many more ‘Western’ women who show up on campus generously displaying their flesh and tattoos. These devoutly attired Muslim women display an un-compromised sense of self-esteem and self-worth, or in contemporary political terms, they display unabashed empowerment. We Jewish men are commanded, in the Book of Numbers, to wear ‘fringes’ on the four corners of our garments, termed ‘tsitsit’, in order to be reminded to observe all of G-d’s commandments. The appearance of ‘hijabed’ women, I feel, serves the same purpose, not only for the women in such attire, but for all who see them. ‘Lower your gaze and guard your modesty’ is the message conveyed to all by these religiously devout and assertive women, and in the region of America where I live and work, given the hostility accorded to Islam, one can add the moniker ‘courageous’.”

Do you think iCOVER has achieved every goal you imagined it would? Would you do anything differently?

If I could rewind my life 4 years back I wish I had a videographer – iCOVER could have been a truly educational and inspirational film documentary as well.

What is your next step now that iCOVER has been a major hit? Are you working on anything new?

iCOVER has introduced me to wonderful people and inshaAllah I hope to work with them in the future. There are a lot of things in the making!