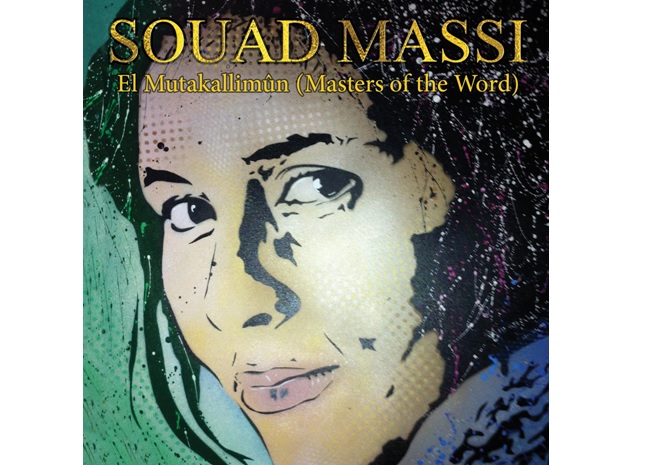 One of most coveted singer-songwriters in the Arab World, Souad Massi, has returned with a bold yet gently exquisite new album, fusing classic Arabic poetry with western jazz, reggae and balladry.

Roughly translated, El Mutakallimȗn means Masters of the Word and rightfully so.

Dedicated to to the Arab-Andalusian poets of Spain, the album was produced to remind the world of the beauty of the Arab culture.

“The Arab-Muslim world has produced great works in science, philosophy, mathematics, medicine and poetry,” Massi said in an interview with the Middle East Eye. “But it all seems forgotten now.”

For Massi, it was important to address this issue through the medium she knows best – music.

“We (Arabs) are not barbarians or uncivilized people…” Massi told Middle East Eye. “Arab youth sometimes faces an identity crisis; and in France, where I live, they sometimes have to choose between rejection of their own culture or a rather skewed version of their religion.”

El Mutakallimȗn serves a dual purpose. First, to remind the Arab youth and diaspora of their lost identity and secondly, to remind people of the richness of the Arab civilization and what it has done for the world. While Europe stagnated during the Dark Ages, the Arab world flourished in the sciences, medicine and the arts, including Spain which was then ruled by the Arab Muslims.

It is only justified then, that Souad Massi’s album be dedicated to the Arab-Spanish poets who accomplished a lot in the field of rational thought and dialogue during the Middle Ages – a legacy that continues into the 21st century through revolutionary poets like Ahmed Matar and Abou El Kacem Chebbi.

“I like these words written by a contemporary Iraqi poet Ahmad Matar: ‘Poetry is not an Arab regime that eclipses with its leader’s death. And it is not an alternative to action. It is an art form whose mission is to disrupt, expose, stand witness to the reality and that expands beyond the present time. Poetry comes before the action… So poetry is regenerating. Poetry illuminates the path and guides our actions,’” said Massi.

El Mutakallimȗn beautifully blends rock, folk, Fado style, and African soul music along with Arabic singing – a combination that reflects the rebellious nature of the Arab poets of Andalusia.

Freedom and fear are common themes that appear in the songs of El Mutakallimȗn, where Souad Massi seems to describe the present situation of the region and its people. Constantly questioning the meaning of freedom, El Mutakallimȗn not only provides musical entertainment, but also food for thought for the people listening to it.

“Yes, of course it’s political,” Massi said in an interview with The Guardian. “I believe in people who are fighting for freedom, and I try to give them some hope with my music. It’s my responsibility and my role.”

Although Massi sings in Arabic, her music has universal appeal.

Her musical strength lies in her unique ability to take us through a nostalgic introspection that is emotionally charged, not by screaming from a pulpit but through lyrics that are philosophical yet accessible conveyed through remarkable tenderness.

What makes her music so distinct from the rest is because it is so raw and fresh. She spins her plain and simple words into a beautiful piece that is closer to poetry than it is to a song.

For Souad, El Mutakallimȗn took two and a half years to complete for several reasons, one of them being that her fans had suggested the poems she should look at while writing her songs. She states her words as clearly as possible in her songs, drawing inspiration from what people would like to hear from her – something that makes people relate to her more easily.

“This is the artist’s world,” Massi told Middle East Monitor. “To give a dream to people, to give them hope and happiness. It’s a small thing, but we need that.”