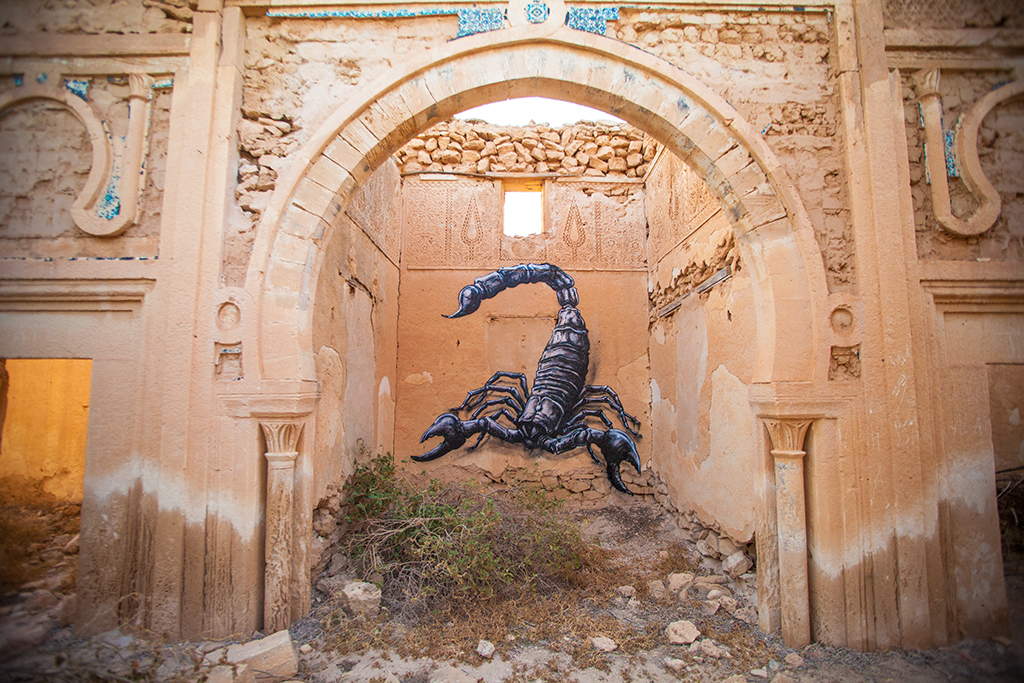 Eager to scrawl over the walls of the Tunisian island of Djerba, more than 150 street artists from across the globe were invited to take part in a unique project called Djerbahood – one of the largest permanent street art installations of its kind.

Taking place in the village of Erriadh this summer, the real open-air museum was organized by French-Tunisian Mehdi Ben Cheikh, the founder of Galerie Itinerrance in Paris, who overcome numerous legal hurdles and concerns from residents and local authorities to stage the unique project.

“Street art is the biggest and most unique art movement in history because of its global impact and its lack of dependence on conventional institutions, and my role is to help it develop and reach across borders,” said Cheikh. “We’re bringing street art back to the streets, where it can be seen by everyone for free.” 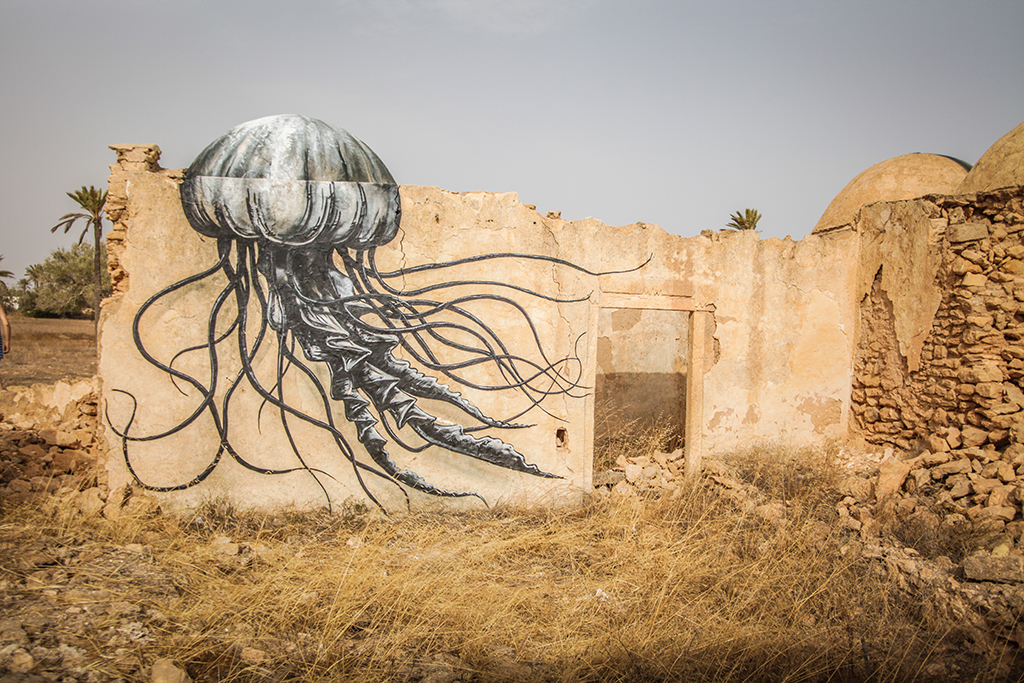 Some of participating artists included major figures like French-Tunisian street artist eL Seed, Roa, C215, Faith47, Alexis Diaz, and Phlegm. The artists were given a free reign to paint their work and add an extra aesthetic value to the village rather than change and alter the already picturesque village and its heritage. 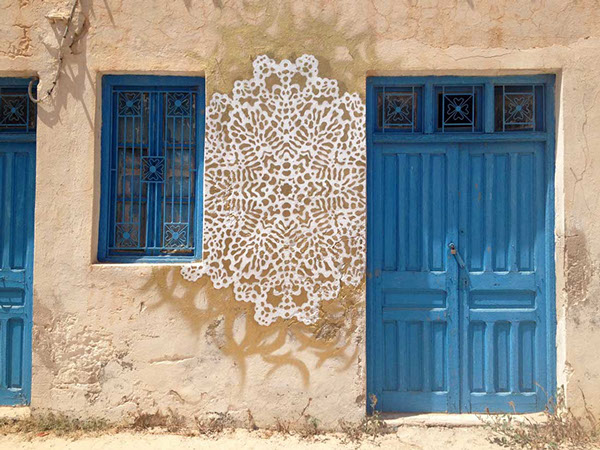 Cheikh said he thought of this project as a means to celebrate the cultural diversity of Tunisia where people come together from different cultures, traditions and backgrounds to create a truly multicultural community.

“I wanted to do a project in Tunisia, but it was also a question of logistics,” said Cheikh. “I couldn’t send artists to the middle of nowhere. But also because Muslims, Christians and Jews have lived here in peace for the last 2,000 years or so. I’m not here to aggravate anyone, but to consolidate this aspect, which I find beautiful, and together with the natural beauty of the village, provides the artists with a unique canvas.”

He also mentioned that he hopes that “the locals will keep the project alive” after they leave, allow the project to grow and eventually cover the whole island of Djerba once known as the ‘Island of Dreams.’ 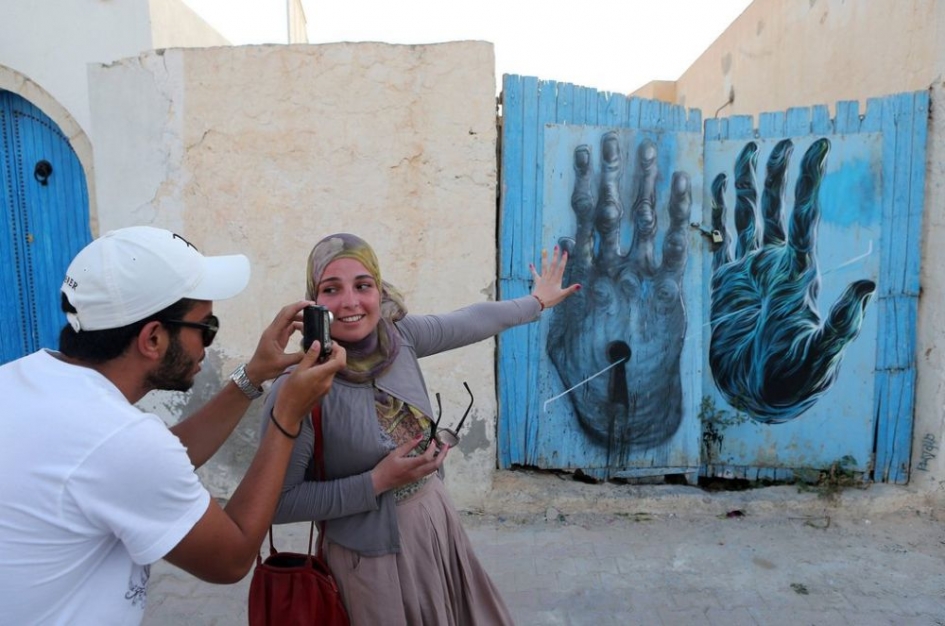 Street art is an ancient form of communication in the Middle East that is now seeing resurgence in areas where “people have a political point to make.”

Described as the “offline social media,” street art has been used as an effective medium to inspire cultural and political movements across the Middle East, particularly before and during the Arab Spring, reflecting cultural shifts, political views and trends in the region. In countries like Libya and Egypt, locals often took to street walls to establish a coherent source of mass communication when social media was banned. The result was acres of pictorial and political art covering the walls around areas of political importance. 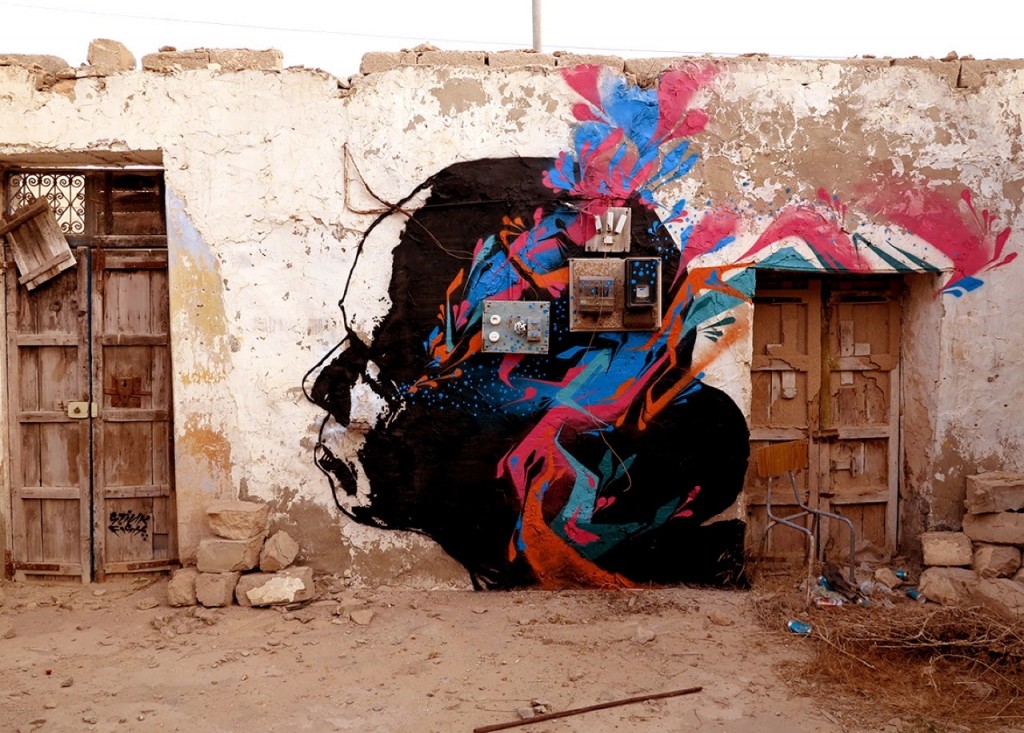 Beyond politics, street art is also just a creative form of expression of one’s inner self, culture and beliefs, giving people a sense of freedom that they may have been lacking for so long.

“What I would like to do is talk about the Arab world in a different way, a positive way,” Cheikh said. 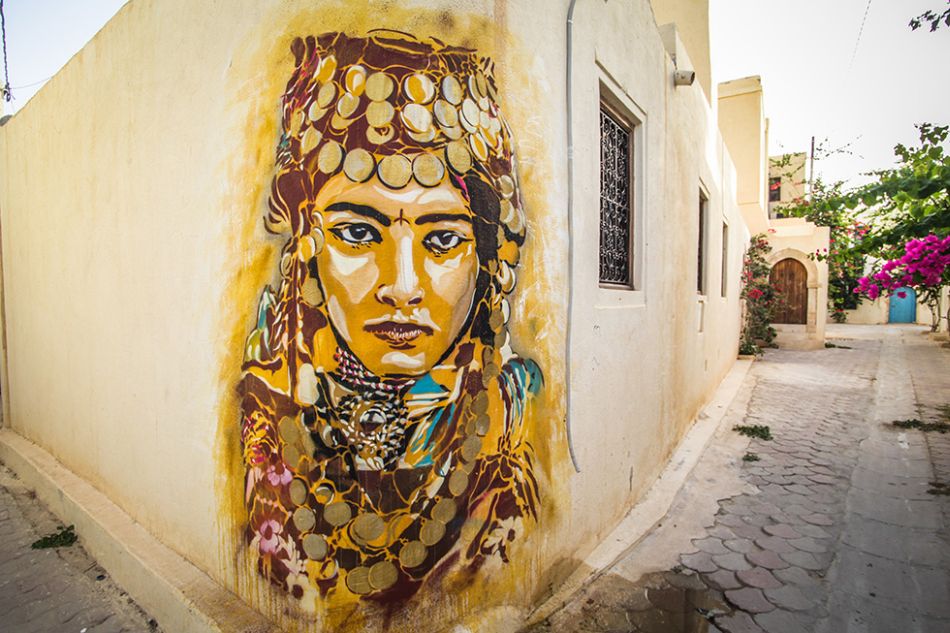 So far, the Djerbahood project has attracted a lot of attention and foreign tourists to the village allowing them to learn more about Tunisia’s rich culture and heritage. It also offers the locals a unique opportunity to meet and interact with people of different nationalities from around the world.

“On my way home, I often stop to speak to the artists who tell me a little bit of their story,” said 63-year-old local shopkeeper Abdel Kader. “Art is important, it encourages us to stay open to others, to other cultures, and I am grateful to this project because it has allowed me to meet people from all over the world, to travel, and best of all, to open my mind.”

Betty Elizebeth lives in London, UK and is an avid reader and blogger. She also works as a guest blogger on her chosen areas of interest and currently writes on behalf of Turkish embassy visa.